Found a bug? Post information about it here so we can fix it!

Run it from Preview, press "1" after starting it.
Now try running it again. It'll quit by itself.

This is bad because for example if your game crashes during playtesting, the next time you launch it the KeyPress component will act as if you're still pressing whatever it was you were pressing at the moment of the crash. This can result in some truly bizarre ingame behavior.

The only way to "revive" the KeyPress component is to press the key (that it thinks you're still holding down) again.
Top

This should now be fixed: http://www.zgameeditor.org/files/ZGameEditor_beta.zip

This version is now built with the latest Delphi 10.4 version so please let me know if anything behaves odd.

About your other thread with the OnClose not calling that is not so easy to fix. The quit() function is a bit special and it executes differently at runtime compared to in the designer.

Hope you have a nice Christmas holidays

Great, it works – thanks so much!!! Hope you have nice Christmas holidays too

I did notice a few things, for example some descriptions are garbled (admittedly this is my fault because I was using Unicode characters) but also some projects that used to run perfectly are now throwing strange errors:

Is is with this specific project only? Does it work to launch a simple project?

I'll make a new build later if this is a problem for you.
Top

It seems it's affecting quite a few projects, everybody else who tested it (only one person but still

maybe we'll hear from him later) was also unable to build a working exe. Simple projects seem to work. I noticed some other things, still investigating.
Top 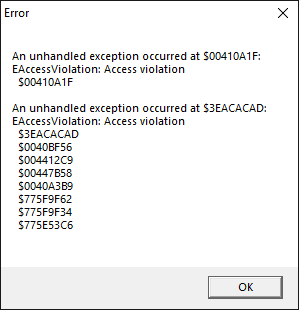 Some projects can't be opened, for example when opening GLES2Demo, I get:

Edit 1: Actually to be precise it can be opened, it just crashes immediately.

Ok I think I know why this is happening. I need to rebuild player.bin. I made some optimizations to how global variables in ZLibraries are accessed and currently that change is in the IDE only and not the runtime. I'll fix it on Monday.
Top

I rebuilt player.bin and now everything seems to work here again: http://www.zgameeditor.org/files/ZGameEditor_beta.zip
Top

Works here too (at least the projects I tried), excellent! Thank you