Cool, that was very helpful

By the way, I didn't know that you could spawn models using createModel(Blast); ...
That will simplify my code a lot!
www.txori.com
Top


Ats wrote:By the way, I didn't know that you could spawn models using createModel(Blast); ...
That will simplify my code a lot!

You can also use "@SpawnModel(Model: Blast);" instead of "createModel(Blast);" if you want

It's basically the same thing ( createModel is a built-in function, while @SpawnModel calls the SpawnModel component ).

Nice. Does that work with KeyPress too?
The F1 help file doesn't provide more than

Note: KeyPress can now also be used as a data type in ZExpressions, if you prefer.

It would be useful to avoid duplicating the same bit of code for keyboard and gamepad, but I can't do a thing using @KeyPress(Keys:"^8");
Since you're not talking about that in the Using KeyPress in ZExpression topic, I'm not sure if I can use it like that...
Last edited by Ats on Wed Nov 21, 2018 3:36 pm, edited 1 time in total.
www.txori.com
Top


Ats wrote:Does that work with KeyPress too?


Ats wrote:It would be useful to avoid duplicating the same bit of code for keyboard and gamepad

I usually use something like* the attached approach to combine keyboard and joystick input.

*Depends a bit on what input is needed and how it's used.

So yeah, I was resurecting this game those last few days.
Now I have menus and everything's working on computer or Android. Everything but the explosions... There is some kind of blue light on the background and models, and most of all, the particles are messed up.

What should I do?

(BTW Kjell, my rotating objects are mines, shrapnels and asteroids

So after a bunch of tries, following the few advices that I found here and there, I managed to display the particles almost correctly on Android. They are drawn over everything, but at least they don't look like crap...
If only I could get rid of the blueish color in the background, there wouldn't be that black square effect around the explosions. So I checked the ZGE Android games I could find on Google Play.
Here's Saucer Invasion by JPH. Somehow, he managed to remove it. The black parts of the background are black. No problem with his particles. So did I miss a checkbox somewhere ?
I was also thinking of adding a background image instead of just having the black clear color. Maybe that should do the trick. But my spaceship also have the blue effect over it so I think it is some kind of weird ambiant light...
Maybe I have to add a camera instead of using App.Camera ?
www.txori.com
Top

I've just released the first beta of my game for PC. I can't release the Android version yet with all the crap going on with the sprite's alpha...

The new name is OMEGANAUT !
I'll have to write a little backstory for the game. Arcade style.

Now I'm going to add new obstacles and ships with different behaviours and once I'll get enough, I'll work on the generative level design instead of spawning everything with complete randomness.

Your feedbacks are very welcome

I had a quick look at your game using a OpenGL debugger .. seems like there are quite a lot of texture swaps, you might want to look into that. In fact, you're using so few & little amount of texture data, i'd recommend bundling everything in a single texture. Aside from that, one of the ( particle? ) textures is rather unoptimized .. only 36 out of 256 pixels are non-zero, so ( in case you're using the entire texture coordinate space ) around 85% of the fill-rate is wasted. 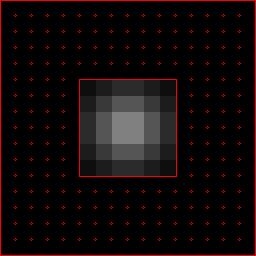 Thanks Kjell, that's interesting. What OpenGL debugger program do you use?

I have only four textures in the game: Both circles are created using BitmapRect and BitmapBlur components. Is it better to trace a circle using a BitmapExpression?
But thanks for your image, now I understand how textures are used. So using a 16x16 for a 1 or 2 pixel star is a waste.
And using a 6x6 inside a 16x16 for the smoke is also a waste. I'm going to optimize that

So I'm calling those textures only when needed, on the onRender of their own models. Everything else is in the game covered with a FlatMaterial without texture. So I don't know why there would be that much texture swap? Unless particles are rendered between spaceships models?

Edit: Oh! And I had the wrong material/texture on the lasers...
www.txori.com
Top


Ats wrote:What OpenGL debugger program do you use?

Not necessarily .. it's about how you use that texture. For example, take the following texture ( 32x32 pixels of which only the middle 16x16 region is used ).

If you use the entire texture on a sprite you end up with a lot of pixels that basically do nothing ( alpha blending disabled for demonstration purposes ). 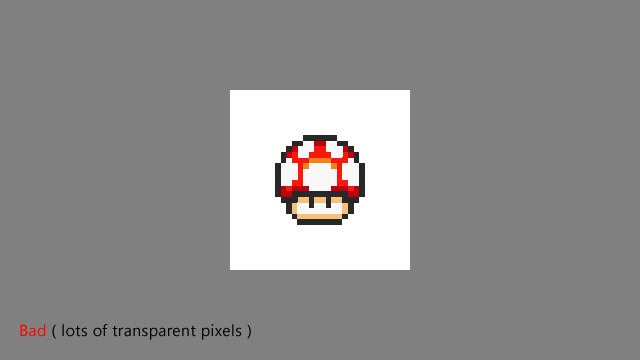 Whereas when you only use the middle 16x16 region ( by changing the texCoords ) that number is far lower ( you can scale the sprite down 0.5x to get the same result ). 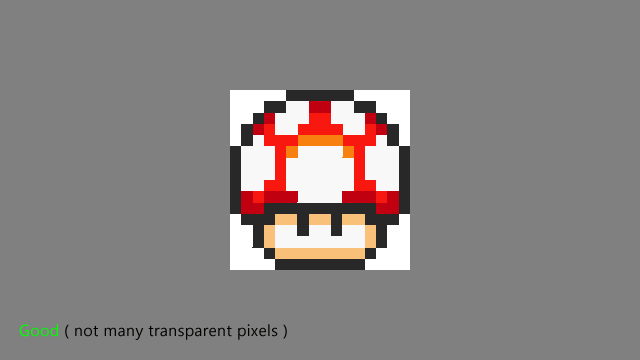 + I just benchmarked this in ZGE by spawning a ton of models .. and the version with the exact same texture but zoomed texCoords on a smaller sprite literally runs 4 times faster even though they produce the exact same results.


Ats wrote:I don't know why there would be that much texture swap?

You control the order of how things get rendered .. ZGE doesn't do anything ( automagically ) in that regard.

Thank you Kjell, that was very helpful

So I've optimized the textures: now I only have one 8x8 pixels circle (generated thanks to the example you provided here). The smoke explosions looks better, it works way better and I don't have the black void around the sprites on Android anymore. I think it came from the background starfield that was DepthSorted instead of Normal...

But even after trying all combinations of ZBuffer / DepthSorted / Rendering order, the sprites for the explosions are still rendered behind everything on Android. I believe it comes from here? viewtopic.php?f=3&t=1308&p=8467&hilit=a ... ency#p8467

Now I only have to draw an icon, write some text and decipher the explanations of the new Google Play keystore for an Android release

New version today with a screen to configure the keyboard or to invert the vertical axis (who does that anyway?), a lot of optimizations and everything is ready for the Android release. I just have to understand how the new Google Play App signing is working...

Next, I'll be working on sounds and savefile. I hope this example is working for PC AND Android

So savefile works like a charm on both devices. Though I don't know where my config.dat file might be hiding on Android.
I had to copy my parameters in a Setup array before saving, and the other way around for loading. It works, I hope that's how I should do it.

The controls are quite experimental : Good luck !
www.txori.com
Top

Tomorrow I'll try to compile for linux, using the tutorial I wrote a few years ago. I hope I wrote that to be understandable...

Also I was wondering how should I do a background image... Maybe by drawing a 2D box? But since the clipping view is at 500 pixels, that would be a huge square. Maybe it is better to draw a smaller background using the Layer2d example. And what about the screen ratio?
www.txori.com
Top


Ats wrote:Also I was wondering how should I do a background image... Maybe by drawing a 2D box? But since the clipping view is at 500 pixels, that would be a huge square.

The easiest solution is to simply draw your background using a Material with Z-Buffer disabled before anything else, then it will appear behind everything you render subsequently regardless of how far away it is. For example ..